Oscar Wilde and the Murders at Reading Gaol (Brandreth) 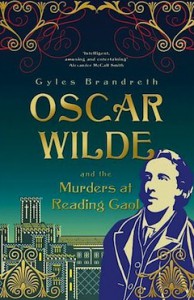 The sixth of the Brandreth Oscar Wilde murder mysteries, this is in many ways my favourite. That is, I suppose, because for me these books have been more about Brandreth's re-creation of Wilde's voice and milieu, and the murder mystery in each has been secondary. So this novel, which takes place during and just after Wilde's brutal incarceration for homosexuality, is enormously satisfying in its evocation of time and place, even though, by necessity, we lose Conan Doyle as a character, and also by necessity, the whole tone is quite a bit darker than in the rest of the series.

Brandreth is not nearly as sorry for Wilde as he was for himself - unsurprisingly - in De Profundis, his essay-letter from jail. His painful separation from the unworthy Douglas, which of course obsessed the real Wilde, barely gets a mention here. Instead, we get a gallery of minor characters, including some gay and/or cross-dressing, and on every step of the villainy ladder. The delight, of course, is in Wilde's acute observations of them.

While I'm in hopes this won't be the last "Oscar Wilde and...", it comes chronologically very close to the end of Wilde's life, so if we are to have another, it will either have to be absolutely on the Paris deathbed, or dip back into earlier (and more light-hearted) times. I'm up for either, Mr. Brandreth.