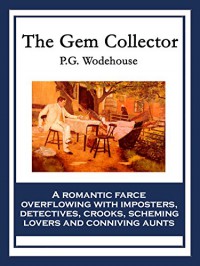 This was the quintessential airplane read - free in e-version, ephemeral and amusing, and just long enough to take one from one side of the continent to the other. It's relatively early Wodehouse. This is the version of a story published in the American literary magazine Ainslee's in 1909; it was republished - and possibly revised/expanded - as A Gentleman of Leisure (UK) or The Intrusion of Jimmy (US) the following year. I would describe it as droll rather than flat-out funny in the way Wodehouse sometimes is in the Jeeves books a couple of decades later.

Jimmy is a jewel thief who has attained a British aristocratic title by inheritance, but plenty of other people in this book are also suppressing a less than pristine past, and the humour largely resides in the contrasts between the manners expected of certain nations (especially US/UK) and certain classes and the actual thoughts and actions of the principals. I couldn't tell you what exactly happens with the extravagant necklace of the title (tempting people to theft), but I'm pretty sure there must be a paste duplicate in there somewhere.