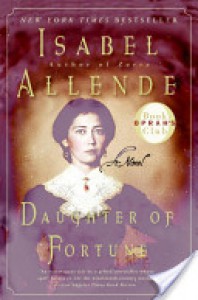 By coincidence, this was one of several works I've read in the past year set (or set partially) in the California gold rush of 1849. I'd say this is by the far the most successful. The others, by the way, are The Sisters Brothers, and the novelized version of Lola Montez' life.

The title character, Eliza Sommers, grows up in early 19th century Chile, but in a very specialized sub-culture (as you can tell by her name) - the British colony of Valparaiso. Eliza is a abandoned doorstep orphan and so her identity from the very beginning is shrouded in storytelling. The novel, in its largest terms, is the continuing story of her discovery of that identity, and her increasing control over that narrative.

In the early chapters about her girlhood and adolescence, Eliza is presented with two contrasting mother figures: indigenous Mama Fresia, housekeeper and nursemaid, overwhelmingly practical but superstitious and a keeper of secrets; and spinster Englishwoman Rose, who has conventional ideas about women and marriage as tightly bound as her corsets, but (or perhaps therefore) keeps a secret or two of her own.

Matchmaking efforts for the growing Eliza go awry, as do the efforts of a couple of unsuccessful suitors for Rose, and each chapter is crammed with fascinating historical detail, well-integrated, about that period and place. Eliza has a quick dream of adolescent love, which finds its expression upon a pile of unused curtains in an unused room, and then her first love, who is a political idealist, leaves her behind.

Eliza pursues him to California on a fairly horrible journey as a stowaway (Valparaiso is a port city, as of course is San Francisco), but what we might fear would turn out to be a rather conventional romance reunion turns instead into a series of fascinating adventures in fruitless pursuit of an outlaw who may be him,in the wholly lawless place that is gold rush California. As her adventures unfold, we also learn a great deal about the past and present of a companion who becomes increasingly important, a Chinese doctor named Tao Chi'en.

In the last paragraph of the novel, Eliza, having been permitted to view the remains of the notorious outlaw, turns to Tao Chi'en and says simply, "I am free." For what happens in between (including a two-page appearance by Lola Montez, expertly rendered), I strongly urge anybody who likes historical novels, or novels with psychological insight, or both, to read and savour this book. It really is very very good.