Antonina: or, The Fall of Rome (Collins) 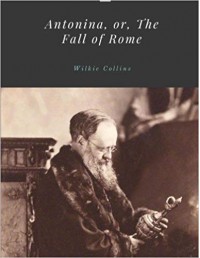 This is Wilkie Collins' first published novel, and it definitely shows. I am generally a fan of the expansiveness of Victorian prose, and of the tendency of Victorian narrators to break the fourth wall and address the reader directly. I find both things charming. But "discursive" doesn't begin to cover it when it comes to Collins' self-conscious and very long apostrophes to his reader, often merely for the purpose of moving from one setting to another. He rarely uses less than a page where a sentence (or nothing at all) would do. In fact, this was so noticeable that I checked to see whether "Antonina" was originally published in parts, or for a magazine, either of which might lead to - though not completely excuse - padding towards a word count. Not so, however - Antonina was published in volume form from the beginning. So all there is to see here is the growing pains of a young author; apparently he had yet to meet his highly influential mentor, Dickens.

Antonina, or the Fall of Rome is a historical novel set in an era most people are unfamiliar with, I should think, namely the early 5th century, when the Goths led, and the Huns participated in, the siege and eventual sacking of Rome. For the purposes of his novel, Collins has simplified the exceedingly complicated series of multiple sieges and battles, not to mention dramatic shifts in loyalties and alliances, down to one very long siege and its outcome. He has principal characters on both sides of the conflict; furthermore, he sets up a very deliberate contrast and conflict between extremist representatives of the Christian religion (by this point dominant) and the declining pagan religion. The conflict is centred in two men, one of them the rather oppressive father of the title young lady. There is an entirely incredible (and in my view unnecessary) coincidence about these two men introduced towards the end of the plot.

Madness is a primary motif of this work. Almost none of the primary characters make it through without having some sort of breakdown, but two of the principals - Goisvintha and Ulpius - are essentially mad for a large part of the novel. Goisvintha is a Goth woman whose husband and children have been murdered by the Romans; she exists primarily as a threat to Antonina to whose death she manages to attach an entirely disproportionate urgency as a symbol of her revenge on the entire Roman people. She is also more or less directly responsible for the death of her own brother, Hermanric, who has the poor taste to become romantically attached to Antonina for a very brief and idyllic period. Ulpius is a pagan priest, also a threat to Antonina (we are first introduced to him pretending to be a Christian acolyte of her father Numerian); Ulpius has already seen the defeat of his religion in Alexandria and ends up dementedly occupying a deserted temple, where he carries out human sacrifices with a hidden "mechanism" over the river, and also builds up a monumental pile of idols in it.

Antonina herself is more or less a cipher as a character; she loves music (against her father's instructions); she's naive and obedient; she very nearly dies of famine, but survives. This book doesn't really qualify as a romance, despite the Hermanric/Antonina episode in the middle of it. There is one alternate suitor, a somewhat older aristocratic Roman named Vetranio; he attempts to seduce/rape Antonina near the beginning, and his remorseful conversion from his pleasure-loving ways to sober country living (and support of, but not pursuit of, Antonina) forms the last few chapters after all the excitement of violent deaths in the temple - the real climax of the novel - is over.

Vetranio has one of the set-pieces of the novel: the feast of death, where he and a number of other degenerate friends have a banquet (without any food, more or less) with a corpse standing guard over the table, and with the intent of drinking/drugging their already weakened selves to death. The descriptions of this scene and the temple scene are the most heightened in the book - this is the beginning of Collins' reputation as a sensationalist writer.

If you're going to read one Wilkie Collins novel in your life, this definitely shouldn't be it (go for The Moonstone or The Woman in White), but as a diversion, despite its longueurs, it wasn't bad.