The Colony of Unrequited Dreams (Johnston) 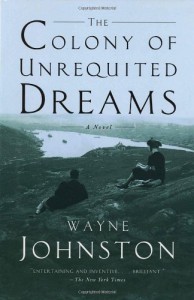 I've read a few Newfoundland novels lately, but this one, a fictionalized autobiography of Joey Smallwood, Newfoundland's first Premier, differs from the rest of them in that it is largely an urban novel, with most of the action set either in St. John's or in New York. Smallwood spent time working for the radical left-wing press in New York in his youth, and remained a socialist throughout his long political career, though his emphasis on economic development for Newfoundland meant that he controversially sided with large corporations (and foreign corporations at that) against unions in a number of major decisions. This novel is not, however, an economic or political history of Newfoundland, though elements of both are wryly scattered throughout, and the omnipresence of the historical view is very much felt through the interspersed writings of fictional historian, journalist and love interest [Sheilagh] Fielding - always known by her last name, just as she always addresses Smallwood as "Smallwood". And yes, as the title would suggest, not only are the larger dreams of the new province in Canada largely unrequited, but so too are the affections of Smallwood and Fielding, though it is hard, sometimes, to discern in which direction the unrequited feelings are flowing, both characters are so prickly, defensive and entirely caught up in their own worlds.

I'm not going to try to describe the way the plot winds in and out, incorporating major historical events in Smallwood's actual life like his trip on foot across the island, following the major railway line, recruiting union members; his harrowing trip as a journalist on a sealing voyage where a large part of the crew was stranded and frozen; his fraught political relationship with pre-Confederation Newfoundland politicians under the old system of colonial government from Britain; his shoestring existence in extreme poverty in New York. Nor was I particularly concerned to sort out fact from fiction in all of this. The more intriguing mystery was the characters, and how a couple of key (and likely fictional) events in their youth drove them through life. Those events involved written evidence, and the existence of written histories, and even a book of history as a possible instrument of homicide - OK, if you want more, you must read the book. And I really do think you should if you enjoy description that leaps off the page (strange, familiar, and strangely familiar settings), and characters who make you ache a bit even while they stubbornly withhold full understanding of their pain.

You don't need to know a lot about Newfoundland or its history to enjoy "Colony of Unrequited Dreams". You may find, however, that this fictional history about histories makes you want to know more of the truth. Heartily recommended.