B Plus: Dancing For Mikhail Baryshnikov at American Ballet Theatre (Langlois) 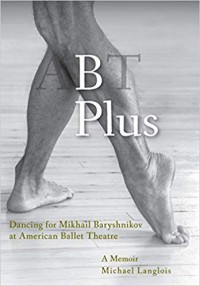 I was a massive Baryshnikov fan back in the 70s and 80s, and therefore this memoir by corps de ballet dancer Michael Langlois was instantly of interest. As it turns out, he's also a reasonably interesting man himself. He's particularly frank about two subjects: the perils of eating disorders, and the way he had to negotiate being a straight ballet dancer (like his hero/employer Baryshnikov, incidentally), given both the outside world's stereotyping and the actuality of maintaining friendships and boundaries within the ballet world itself. He appears to have managed a very close friendship and, for a time, roommate relationship, with gay dancer Peter Fonseca, for instance (alas, Fonseca was part of the dreadful losses to AIDS in the ballet world in the 80s and 90s). And although I was, of course, in it for the celebrity cameos, his anecdotes about the regular company members, musicians and coaching staff are quite engaging: he doesn't hesitate to re-create conversations and describe physical surroundings in a fair bit of detail. Finally, he is just about forthcoming enough (i.e. not too much) about the progress and eventual deterioration of the relationship with his girlfriend Julie, another dancer in the company.

Living up to the promise of the subtitle, Baryshnikov makes his appearance throughout a large part of the book, although it is clear there was never any more of a relationship between the two men than employer/employee, or coach/dancer. Langlois is actually quite funny about Baryshnikov's inability to articulate exactly what he wanted from a less talented dancer; like many with brilliant gifts, he seems, by this author's account, to have been a bit stymied by the fact that they didn't just *know* how to do it, as he did himself. Baryshnikov also called Langlois "Mikey" for many years, and Langlois generously (and probably correctly) surmises that he didn't realize the diminutive was derogatory, unlike his own "Misha", by which everyone seems to have known him.

Langlois is also likeably frank about the impact of realizing that his talent, though good, was not first-class (hence the book title), and how he eventually resolved that by moving first to smaller companies where he could do better roles, and then eventually out of the ballet world altogether. He now has an online presence as a massage therapist.