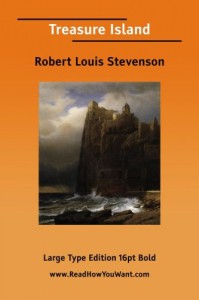 If I read this in childhood - and it would have been in a children's abridged edition, I should think - it didn't leave any memory of its rather gory plot, nor of the curious moral ambiguity of it principal villain, Long John Silver.

Nonetheless, once it got going, it was more or less what I expected: an adventure story featuring a young man with more courage than sense. The abrupt change out of his first-person narrative to another point of view for parts of the plot took me by surprise a bit - but frankly, that would never have bothered me in the slightest if I'd read it when I was younger.

The e-version I read the story in was rather bad. Each page of the first 100 or so was interrupted by an illustration having nothing to do with the text (mostly the same scene of pioneer America, repeated over and over). No-one had bothered to supply the missing first letters of opening words in each chapter (likely decorative initials in the scanned original.) The file is entitled "Complete Works of R.L. Stevenson", but it contains exactly 3 of his most famous novels - probably volume 1 of a collected edition.

And all this notwithstanding, I enjoyed reading this missing piece from my childhood. It was clear, straightforward, vivid storytelling.