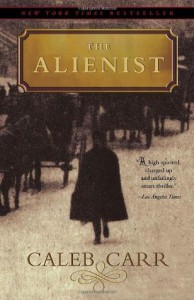 I borrowed this first-in-a-series from my e-library on an impulse, because it was heavily recommended on a book forum I follow. I enjoyed it, with reservations. A little to my surprise, it was published in 1994, but I suppose it's receiving a second burst of popularity because it was made into a 2018 TV series (which I have not seen).

Set in New York in 1896 (although introduced by a brief flash-forward to Theodore Roosevelt's funeral in 1919), this is the story of a serial murderer whose victims, juvenile transgender or male cross-dressing prostitutes, are particularly unmentionable in polite society. Roosevelt is New York City police commissioner (a fact about him I did not know), and is in the process of sweeping corruption out of the department, which is earning him and anyone associated with him a few enemies. He is a secondary but important character in this narrative, and the fact that there is no historical account of his having been involved or in charge of such a case is easily enough explained by society's squeamishness; that same explanation is given for the fact that our narrator, John Moore, though a reporter for the New York Times, never attempts to report on the highly shocking events in the novel.

Dr. Laszlo Kreizler is the Alienist of the title, the principal investigator, and the mouthpiece for what I imagine is a somewhat more sophisticated view of serial killer profiling than was actually available in the 1890s. Two other investigators (Jewish brothers, who supply some of the comedic byplay to offset the gruesome details of the murders) are given the responsibility of introducing fingerprint evidence and also travelling to remote places to gather evidence and provide a bit of historical background on the American Indians of the time (and the generation before).

This is not a "puzzle" mystery - we discover the murderer pretty much in lockstep with Kreizler, Moore, and their somewhat anachronistic but nonetheless welcome female detective-by-courtesy, Sara Howard, whose largest contribution to the profiling solution is to bring a woman's perspective (rather oversimplified) that women can also be abusers, and that such abuse is not necessarily physical.

Not sure what real-life modern-day profilers would think of Carr's explication of the killer's psyche or his fictional characters' subsequent ability to track him down starting with archival resources (pleased to see a plug for the profession, though!) It was convincing enough for my fiction-reading purposes, and seemed consonant with what I have learned through other (equally unreliable) sources such as the TV show "Criminal Minds". It was the perhaps over-enthusiastic dips into psychiatry, along with the very enthusiastic depictions of New York social history, that made me wonder whether Carr was casting all his bread upon the waters at once; I do enjoy good historical research in any kind of novel, but there was a great deal of explaining and describing here that, it seemed to me, wasn't all entirely focused on the telling of the story at hand, even if you concede that a mystery novelist has to create red herrings for his readers.

I could see the overarching backstory for principal characters being set up: Sara Howard is perched ambiguously in a non-romantic but potentially romantic situation for both Kreizler - who devastatingly loses a romantic interest in the course of this novel - and Moore - who, we are given to understand, has suffered a similar devastating loss just before the events. Unfortunately I made the mistake of reading online reviews for subsequent volumes in the series, and the consensus (if such a thing exists) was that the quality drops off. So though I did enjoy this one, I may not be in a hurry to revisit the series.