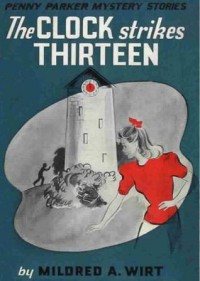 This mystery novel for teen girls is by the same woman (Mildred Benson) who was the primary contributor to the multi-author Nancy Drew series for its first 25 titles or so. It's not hard to see; Penny Parker, the heroine of this and 16 other titles in her series, is very like Nancy in her intelligence, spunkiness, and rather unrealistic freedom of action. Penny is the daughter of a reliably supportive newspaper editor, and in the absence of law enforcement connections, the pursuit of a story on behalf of her Dad's paper becomes a somewhat plausible pretext for her investigations. Benson was in the newspaper business as well, and for me one of the most interesting passages in the book was where she described the actual workings necessary overnight in order to put out a special edition first thing in the morning.

This is a mystery without a murder; the clandestine gang who signal their meetings with an extra chime to the clock have mercenary motives. However, they're sufficiently brutish (and one has a nasty backstory with a hit-and-run resulting in the orphaning of a pathetic little girl), and you're glad, although not terribly surprised, when the masked leader of the gang is unmasked and held to account by a heroic little gang of journalists until the police arrive.

One of the things I noticed about Penny's story is the emphasis on the cars in her life (she has two!) This reminds me of another series, the explicitly named "automobile girls" by Laura Dent Crane, where ownership (or at least use) of a car is the key to a young woman's freedom to explore her world.